The Equipment Data Acquisition (EDA, also known as Interface A) standards are a collection of SEMI standards intended to facilitate and improve communication between a factory's data gathering software applications and the factory equipment. The factory uses EDA to collect specific data from equipment, and then analyze that data to determine how best to increase productivity, improve product quality, and reduce costs.

EDA does not replace the SEMI GEM/SECS standards or the SEMI GEM300 standards, since EDA does not provide any features for equipment control or configuration. Instead, equipment suppliers support EDA in addition to other required interfaces to provide flexible, high-performance data collection capabilities.

As early as 2010, IC makers started requiring integrated EDA solutions from the equipment suppliers. Since then, the demand has continued to increase as IC makers realize the manufacturing benefits of analyzing detailed equipment and process data.

Cimetrix Incorporated was at the forefront of the EDA/Interface A standards development from the beginning, and remains dedicated to the evolution and use of these standards. We collaborated with SEMATECH to develop the EDA Equipment Client Connection Emulator to support Freeze Version I (1105), and then for Freeze Version II (0710). Today, we offer Cimetrix ECCE Plus, which supports both versions of the EDA standards.

EDA/Interface A is comprised of multiple SEMI standards all of which are available for download from the SEMI website. The following five are the primary SEMI standards:

Both equipment and factory client applications implement interfaces via web services using SOAP/XML messages over HTTP or HTTPS connections, and those interfaces must comply with the specific SOAP/XML implementations standards E120.1, E125.1, E132.1, and E134.1. 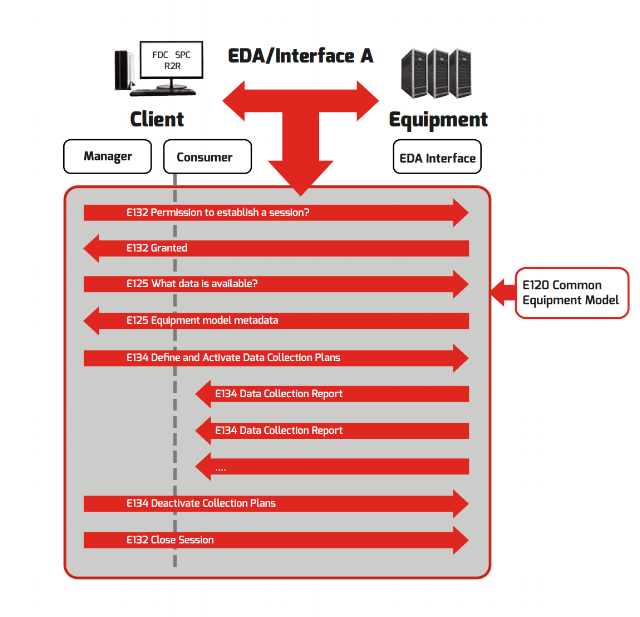 Because the EDA standards continue to evolve and change, SEMI and its member companies initiated the concept of “freeze versions.” Each freeze identifies a specific version of the individual EDA standards that equipment suppliers and IC makers use as a unified set to implement the interface.

SEMI implemented the freeze version concept by creating two downloadable bundles of standard schema files: one for the 1105 freeze version, and another for the 0710 freeze version. These are available on the SEMI website.

Unless the client and equipment are implementing the same version of the EDA standards, they cannot fully communicate and might be incompatible. This is the nature of SOAP/XML web services technology. The latest version is Freeze Version II (0710), and is the one required by all fabs for new equipment.

EDA/Interface A Terminology and Acronyms

The SEMI E164 standard, approved in July 2012, provides a single, agreed, interpretation of the various SEMI standards as represented in a common metadata definition, which will help drive consistency in how equipment suppliers implement the EDA standards. The Common Metadata will help remove some of the uncertainty that may have prevented many companies from developing factory client applications that can use the EDA data produced by the equipment. For an in-depth look at this topic, please view the video "E164 - EDA Common Metadata").

Three types of tests are used to test compliance of a specific interface implementation to EDA standards: compliance, performance, and equipment model metadata.

To test compliance and performance, download the ISMI Equipment Data Acquisition (EDA) Evaluation Method for the July 2010 Standards Freeze Level document. This document defines the steps to manually evaluate the EDA interface for new or existing equipment, conversions, or a complete fab retool.

To test the conformance of the equipment’s metadata model to the E164 standard, download and use the EDA 0710 freeze version (Metadata Conformance Analyzer V1.2) of the MCA. The required input files for the MCA can be generated directly by both the ECCE Plus and the EDATester.

Mapping and Comparing EDA/Interface A to SECS/GEM

To learn about Mapping EDA/Interface A to SECS/GEM or comparing the standards, click below:

Top Blog Posts on EDA/Interface A