Shortly after the devastating earthquake and tsunami in Japan last March, I read an article that talked about the impact to the semiconductor fab lines in Japan. The article indicated that even those Japanese facilities not directly hit by the crisis were still dealing with power outages and aftershocks. The article also talked about how Japan is the leading producer of the raw silicon used in semiconductor manufacturing. It seemed clear that the effects of the disaster would be felt throughout the semiconductor industry.

I had the opportunity to travel to Japan a couple of weeks ago to visit our distributors and customers. It has been a few months since that article was written, so I was curious to see how things were progressing.  I had heard that the Japanese government had requested businesses to take steps to reduce power consumption by 15% to help avoid possible blackouts due to the loss of the power from the Fukushima Dai-Ichi power plant that was damaged by the tsunami last March. Recent news articles also mentioned that companies could be fined if they didn’t hit the reduced power targets. Hearing all this, I wasn’t sure what I would find once I arrived in Japan.

What I found was a country moving forward and doing what was necessary to keep things progressing toward a full recovery. One example is how practices that had been ingrained in the culture over many years were changing as a response to power shortages.  For example, businesses were responding to the government’s requests and turned up the thermostats. Several of our meetings were held in conference rooms where the thermostat read 27°C (about 80°F). In some meetings the air conditioning was turned off altogether.

Another change that was surprising was the change in how people dressed. The Japanese government started the “Super Cool Biz” campaign and asked businesses to change many of their ingrained practices, including a dress code that encouraged short-sleeve shirts instead of suits and ties! Many of the companies I visited also had signs in their lobbies that talked about “Cool Biz.” Everyone seemed to be on board with the initiative – it was mentioned in most of the meetings I attended.

Here is a picture of Dave Faulkner, Kerry Iwamoto, and our Cimetrix Japan financial staff: 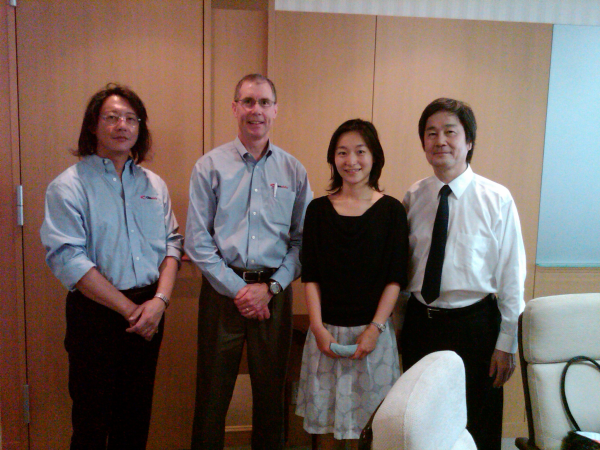 It is amazing to see how people in Japan pull together when times are tough.  There is no doubt the recovery process will take years. I don’t know what the full effect will be to the semiconductor industry, but the semiconductor equipment companies visited on this trip were all working with determined focus to meet their shipment schedules. The distributors and integrators I met with are continuing to plan for and execute projects to install equipment in new factories.