The Cleanup Efforts in Japan

As Dave Faulkner, our Executive VP of Sales and Marketing mentioned in a previous blog post, Cimetrix attended SEMICON Japan in early December 2011. After the show closed on Friday December 9th, I was able to join a group in Tokyo that was heading north to Tohoku, which was the area hardest hit by the March 11, 2011 earthquake and tsunami, to assist with the ongoing effort to clean up after the devastation. The group I joined was the Mormon Helping Hands program sponsored by The Church of Jesus Christ of Latter-day Saints.

Thirty-six of us boarded the bus and left at 10:00 PM, and we arrived at our hotel around 5:30 the next morning. We had a light breakfast, changed our clothes and by 6:30 AM we were back on the bus heading for the Rikuzentaka Volunteer Center for orientation and to receive our assignment for the day.

We were assigned to work in the Hirota area just south and east of what used to be the town of Rikuzentakata. The 2010 census listed the population of Rikuzentakata at 23,302. The small town was supposed to be protected by a seawall that was 6.5 meters (21 feet) high. But that seawall was no match for the tsunami, and more than 80% of the houses in town were swept away by the powerful wave. 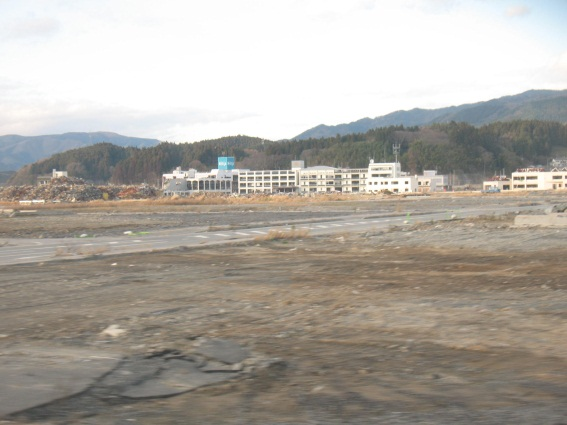 The picture above is all that is left of the downtown area of Rikuzentakata. 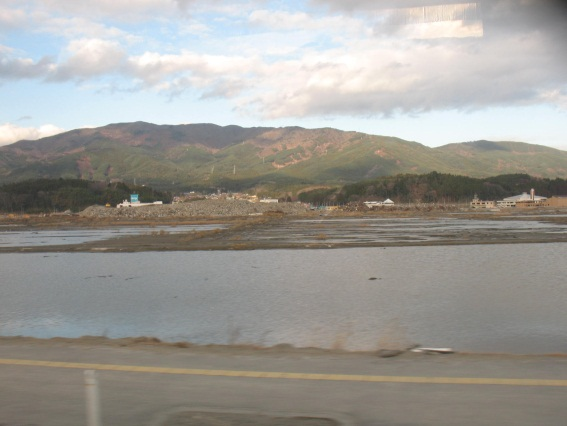 The picture above shows what used to be a major shopping center. The lake in the foreground was the parking lot. The piles of rubble in the background are the remains of homes and businesses that have been gathered since the cleanup effort started in late March 2011.

We continued on to the village of Hirota. While the devastation was on a smaller scale, the force of the tsunami was still readily apparent. I found a picture online which shows the Ono beach seawall before the tsunami. The next picture is one I took of the same seawall as it looks today. You can see that the tsunami pushed large sections of the wall out of the way. 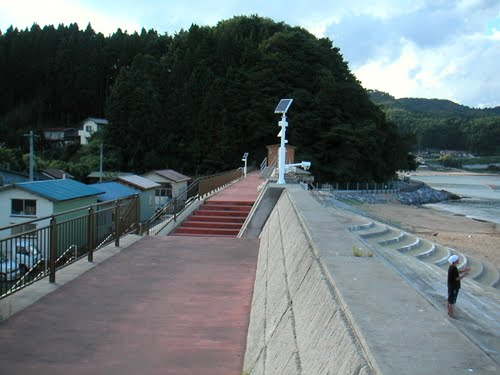 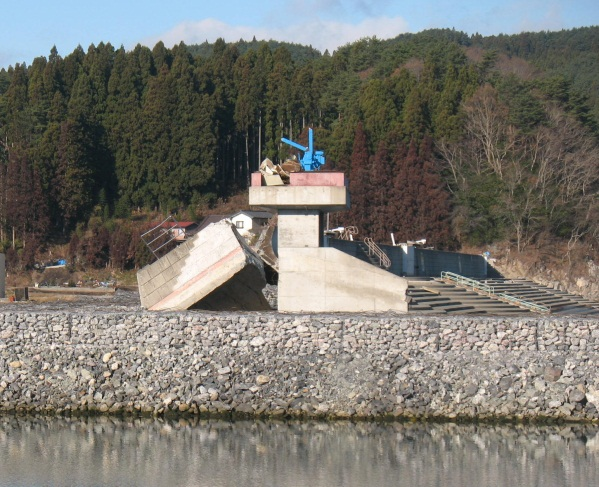 Ono beach seawall after the tsunami

The Japanese government has done an amazing job of rebuilding the infrastructure – roads, power, water and sewer – and removing the major debris. But that has taken so many resources that the individual land owners have had to clean up their own property. The volunteers are there to help with that effort. Many of these people are elderly; some have little hope, having seen all of their processions and mementoes swept away in an instant. They still grieve for lost relatives and face an uncertain future. The volunteer effort provides them with physical help cleaning up and also gives them an emotional boost from seeing that so many people care about them and want to help.

Our group was assigned to work with three landowners who had houses directly behind the Ono beach seawall. In all 3 cases, there was nothing left but a foundation where their homes used to stand. They needed help in clearing the remaining rubble off their land so they can prepare for rebuilding. At one of the sites we cleaned, the only indication that a house was ever there was the water and power lines sticking up from the ground. It seemed that nature was somewhat discriminating as there was a house not more than 30 feet away and a little higher up the hill that had no damage. 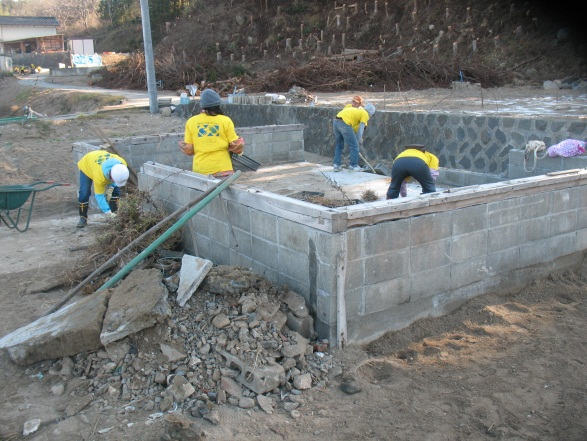 Property before the clean up 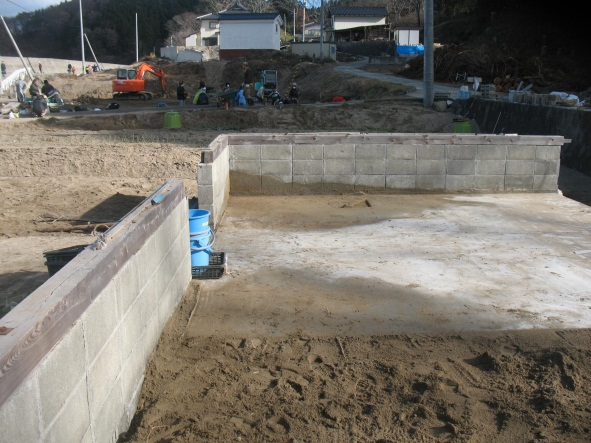 Property after the clean up

Most of the property owners in the neighborhood where we were working are now living in temporary housing which was set up on the grounds of the nearby elementary school. As I looked around at the neighborhood, I was impressed with the number of vegetable gardens I saw. It seemed like the owners wanted some semblance of normalcy, something over which they could have control. So they cleared enough land to plant a garden. While we worked, I could hear a group of boys that had gathered at the Junior High School for a game of baseball. It was another sign that the community is trying to move past the disaster and continue on with life.

I was only there for one day, but it was inspiring to see the continuing efforts to rebuild. There is still a lot of work to do. l left Hirota wishing we could have done more.