See previous series of blog posts on the functionality of CCF here.

While CCF does provide a built-in interface to handle GEM300 messages, CCF can be used just as effectively for building back-end and electronics equipment control applications handling the movement of chips and trays rather than wafers and carriers.

To demonstrate this ability, Cimetrix has added a continuous flow back-end sample as one of the fully working implementations provided with CCF. If you are already familiar with CCF, you will have seen the front-end Atmospheric and Vacuum cluster tool samples.

The continuous flow sample is different from these other samples as described below.

For the Atmospheric and Vacuum samples, material is delivered as wafers in SEMI E87 carriers. For back-end and electronics markets, material is usually not in the form of a wafer and is not delivered in a carrier. For the Continuous Flow sample, the material is delivered on input trays and removed from the system on output trays. All trays used in the sample are similar to JEDEC trays, standard-defined trays for transporting, handling, and storing chips and other components. The trays have slots that can hold material in rows and columns. A JEDEC tray may appear as follows: 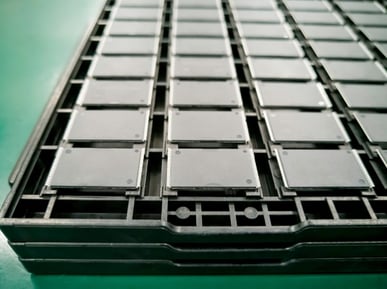 The Continuous Flow sample allows users to specify the number of rows and columns in a tray using configuration parameters. The sample has two input trays and two output trays. 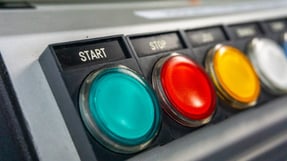 As the name of the Continuous Flow sample indicates, material is continually processed until there is no more material or until the user tells it to stop. The sample does not use SEMI E40 Process Jobs or SEMI E94 Control Jobs to determine how material is processed. Rather the user selects a recipe to use during processing and presses the Start button. Material will continue to be processed until the Stop button is pressed.

By default, the Continuous Flow sample will process all material from the first input tray and then all of the material from the second input tray. When an input tray becomes empty, the empty tray will be removed and replaced with a full one. Similarly, when an output tray becomes full, it is automatically removed and replaced with an empty one. This allows the processing to run continuously until stopped. 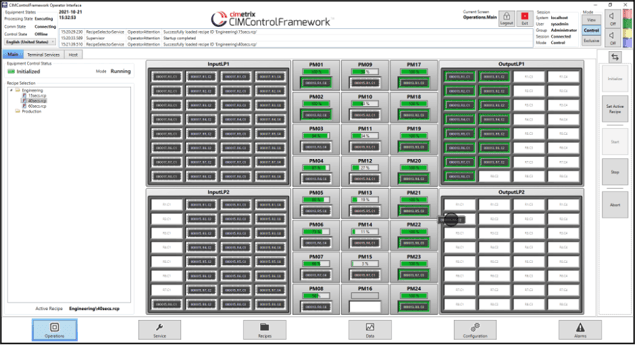 In an upcoming version of CCF, the components of this visualization will be included in a visualization library that users can employ to customize their visualization more easily than has previously been possible in CCF.

The Continuous Flow sample comes with three fully implemented remote commands that allow a host or host emulator to run the continuous flow sample. These commands are:

The following shows the S2F49 remote command body for selecting the recipe as sent from Cimetrix EquipmentTest. 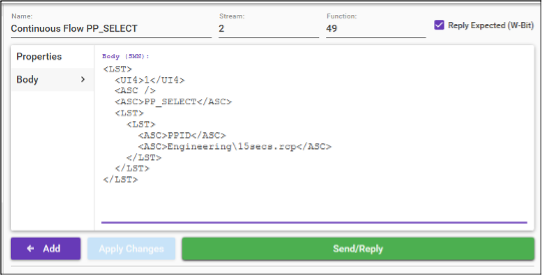 We hope that the new Continuous Flow sample in CCF allows those who are creating semiconductor back-end or electronics equipment control solutions a great starting point for creating their applications. Please contact Cimetrix for additional information by clicking the button below.