In the EDA Best Practices blog series, we have discussed choosing a commercial software platform, using that package to differentiate your data collection capabilities and how to choose what types of data to publish. In this post we will review why you should choose to provide an E164-compliant equipment model.

Equipment Data Acquisition (EDA) - also referred to as Interface A - offers semiconductor manufacturers the ability to collect a significant amount of data that is crucial to the manufacturing process. This data is represented on the equipment as a model, which is communicated to EDA clients as metadata sets. The metadata, based upon the SEMI E125 Specification for Equipment Self-Description, includes the equipment components, events, and exceptions, along with all the available data parameters.

Since the advent of the SEMI EDA standards, developers and fabs have recognized that equipment models, and the resulting metadata sets, can vary greatly. It is possible to create vastly different models for similar pieces of equipment and have both models be compliant with the EDA standards. This makes it difficult for the factories to know where to find the data they are interested in from one type of equipment to another.

Recognizing this issue, the early adopters of the EDA standards launched an initiative in to make the transition to EDA easier and ensure consistency of equipment models and metadata from equipment to equipment. This effort resulted in the E164 EDA Common Metadata standard, approved in July 2012. Another part of this initiative was the development of the Metadata Conformance Analyzer (MCA), which is a utility that tests conformance to this standard. With this specification, equipment modeling is more clearly defined and provides more consistent models between equipment suppliers. This makes it easier for EDA/Interface A users to navigate models and find the data they need.

These requirements may seem unnecessarily strict, but implementing the common metadata standard results in:

Knowing that a model is E164 compliant allows EDA client applications to easily and programmatically define data collection plans knowing that the compliant models must provide all of the specified data with the specified names. For example, the following application is able to track carrier arrival and slotmap information as well as movement of material through a piece of equipment and process data for that equipment. 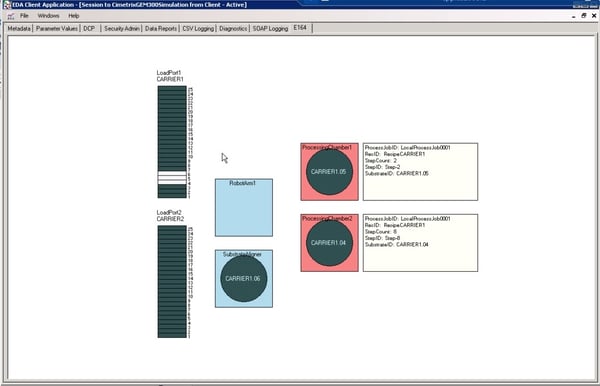 This application will work for any GEM300 equipment that is E164 compliant. The client application developer can confidently create data collection plans for these state machines, knowing that an E164-compliant model must provide the needed state machines and data with the proscribed names.

Decide to be E164 compliant

A number of leading semiconductor manufacturers around the globe have seen the power of requiring their equipment suppliers to provide EDA/E164 on their equipment, and now require it in their purchase specifications.

If you are a semiconductor manufacturer, you should seriously consider doing the same because it will greatly simplify data collection from the equipment (and most of your candidate suppliers probably have an implementation available or underway.

If you are an equipment supplier and your factory customers have not required that your EDA models be E164 compliant, you should still seriously consider providing this capability anyway as a way to differentiate your equipment. Moveover, E164-compliant models are fully compliant with all other EDA standards. Finally, it is much easier and more cost effective to create E164-compliant models from the outset than it is to create non-compliant models and then convert to E164 when the factory requires it.

The purpose of the E164 specification is to encourage companies developing EDA/Interface A connections to implement a more common representation of equipment metadata. By following the E164 standard, equipment suppliers and factories can establish greater consistency from equipment to equipment and from factory to factory. That consistency will make it easier and faster for equipment suppliers to provide a consistent EDA interface, and for factories to develop EDA client applications.