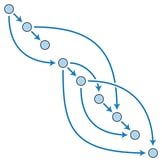 Previous blog posting in this series have discussed the rationale for using SEMI’s GEM, GEM 300, and related automation standards in semiconductor backend factories, and pointed out that the specific adaptations required for the various backend equipment types are one of the focus areas for the SEMI Advanced Backend Factory Integration (ABFI) Task Force. In this posting, I will deal specifically with the benefits that can be realized by using the E157 Process Module Tracking standard in a backend factory context.

Since none of the backend material transformations are implemented in what front end experts would consider a “process chamber,” this may seem like an unlikely fit. Moreover, the velocity of backend processes seems contrary with the typical front end recipe execution paradigm. Finally, the lack of distinct substrate locations for some of the processes makes it difficult to know precisely when the process begins and ends for the affected material in some cases.

Regardless of these challenges, the requirements for single device traceability that include knowing the exact process conditions that a device was exposed to at every moment in its manufacturing life cycle (including the backend) argue for use of this standard wherever possible.Since none of the backend material transformations are implemented in what front end experts would consider a “process chamber,” this may seem like an unlikely fit. Moreover, the velocity of backend processes seems contrary with the typical front end recipe execution paradigm. Finally, the lack of distinct substrate locations for some of the processes makes it difficult to know precisely when the process begins and ends for the affected material.

The purpose of SEMI E157 is “to define a standard equipment capability to report process-related data to the factory system… the activities of a processing location (i.e., process module) that are related to the execution of a recipe.” The standard further states that “the collection of process data during recipe execution is important to today’s semiconductor factories to support various applications that help optimize equipment processes, finished product quality, yield, and overall factory performance.”

These requirements are now every bit as important for backend factories as they are for the front end, so it is useful to understand how E157 can be effectively applied.

First of all, the E157 Module Process State Model is fairly simple, having only 4 states (three of which are “base states” with no sub-states) and 7 state transition events, shown in the diagram below.

This model represents the state of that portion (or portions) of a unit of equipment that executes a recipe to transform whatever material is present in that part of the equipment. In front end equipment, the chambers are relatively distinct, and usually process a small number of substrates (often one) at a time. By contrast, backend processes cover a broad spectrum of material types, from single wafers to strips (or lead frames) of multiple die to individual packages. The material flow characteristics also vary, from discrete (i.e., single workpieces) to batch to continuous. Moreover, the production rates and material volumes for these processes range from perhaps 90 wafers per hour to thousands of packages per hour… With these challenges, it is no wonder that the pace of automation for these facilities has lagged that of the front end.

How is the E157 Standard Used?

From the equipment’s perspective, every time the process module changes state according to the model above, the equipment sends the corresponding state transition event to the factory host computer. This is done using the SECS-II S6, F11 Event Report message with an event name exactly prescribed by the E157 standard.

The event report should also include whatever “context information” from the equipment that the factory applications need to analyze the equipment’s performance and behavior. For some backend processes, this might be lot ID, process job ID, recipe name, control settings, and current parameter values for important process variables. For others, it might be cumulative usage counts for fixtures with limited lifetimes, current levels of consumables used in the process, or configuration parameters for equipment with a range of setup possibilities. To further complicate matters, some of this information is common across most processes, some of it is process-specific, but some of it may actually be vendor-specific. It all depends on how the factory operates.

Finally, when used in conjunction with event timing information from other required standards (e.g., E90 Substrate Management), E157 data can help identify potential productivity issues, say, when there is an unexpected delay between material arrival (from E90) and recipe start (E157).

As noted above, some equipment types process a stream of material continuously. In these situations, for a given lot, multiple substrates may be processed at the same time in a continuous flow (say, on a conveyor through an oven) until the lot is complete. For these types of equipment, E157 cannot be directly applied because it is chamber oriented, and you don’t get much useful information if you use the entire lot as the execution starting and completing events.

However, if you apply the same state model to the material (substrate, strip/lead frame, carrier, etc.) being processed rather than the equipment component, the collection events defined by E157 can be implemented when a unit of that material changes state. Specifically, the equipment can report the same collection events (ExecutionStarted, StepStarted, StepCompleted, ExecutionCompleted, StepFailed and ExecutionFailed) when execution on a substrate changes state, including when a step is started and completed. The meaning of a “step” would still be interpreted and designed by the equipment supplier. Associating these E157 collection events with a new “substrateID” data variable rather than a chamber enables the factory user to track the material state for each substrate going through the equipment.

Even though backend metrology, inspection, and test equipment may run recipes to perform their tasks, since no material transformation takes place, the state transition events and related context are far less important than the measurement and inspection results that these equipment types generate.
For the rest of the backend processes, the relative priorities for implementing E157 are the following:

One category of equipment we have not mentioned is custom assembly equipment that can vary greatly by the end product form factor. The use of E157 in this equipment will depend entirely on the process complexity and sources of variability that must be tracked. However, it is safe to assume that for all but the simplest of processes, E157 will likely play a useful role.

E157 is a prime example of an exceptionally simple and well-written standard built on top of GEM technology that is easy to implement and provides a lot of end user value. The SEMI ABFI task force is now evaluating the specific adaptation of E157 for various backend equipment types and welcomes your contribution to that process.