The Interface A / EDA standards define powerful methods for collecting data from an equipment control application. The data collection can be as simple as querying values of a parameter or two, or as complex as gathering thousands of parameter values across multiple reports. EDA specifies the use of internet standard messaging protocols like HTTP, XML and SOAP messages for collecting this data.

It is possible to define so many data collection plans gathering so much data that the sheer amount of data causes network performance to degrade. To remedy this situation, the EDA standards provide ways of sending the data in “chunks,” which dramatically improves the performance of XML over HTTP.

Two methods for sending data in chunks are grouping and buffering.

Grouping only applies to individual Trace Requests within a Data Collection Plan (DCP).  If I have a trace request with an interval of one second, a group size of 1 would generate a report every second and send it across the wire. If I change my group size to 10, a report would still be generated every second, but the report would not be sent across the wire until 10 reports have accumulated. Each report has its own timestamp and they are arranged in the order they occur. The following diagram shows a trace data collection report with a group size of 3. 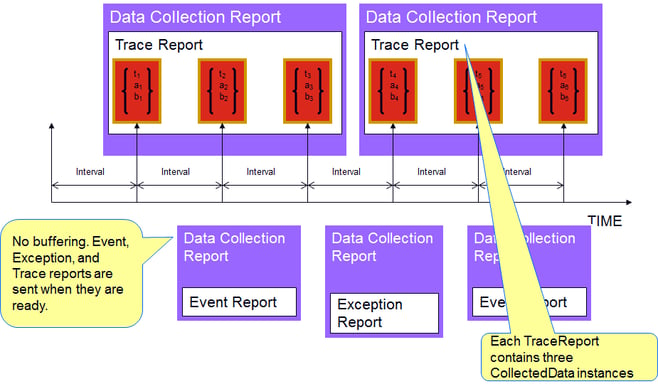 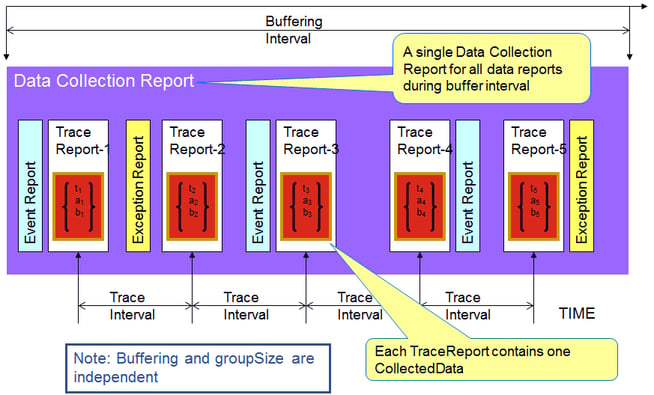 Grouping and buffering can be combined as well. Groups are still defined on a per trace basis. If a group size has not been met when the buffer interval expires, the group report will be in the next buffer report that is sent.

With the provision for transmitting data in blocks, using grouping for trace data reports and/or buffering for all data reports, EDA is well suited for collecting large amounts of data without having a negative effect on network performance.