On April 18, 2013, SYSTEMA GmbH and Cimetrix will host the second SYSTEMA Expert Day 2013 in Dresden, Germany. The focus will be on advanced software solutions for equipment health and productivity monitoring in the discrete manufacturing industries.

SYSTEMA chose the time and place for this event to make it convenient for attending the 2013 European APCM Conference, which will be held at the Dresden Hilton on April 15-17.

There will be presentations from industry experts across the semiconductor supply chain, including semiconductor manufacturers, equipment suppliers, and software products and services suppliers.

The topics will address equipment-related challenges facing semiconductor manufacturers, and there will be discussions and demonstrations regarding:

The agenda as it is currently:

There may be changes to the agenda, so check the SYSTEMA web page for the event for more details (see the link below).

It was great to attend SEMICON Japan this year and see our increased presence at the show.  I also wrote about it last year.

SEMICON Japan was held at the Makuhari Messe, near Chiba Japan, from December 7-9.  It overlapped with the PV Japan 2011 event, held on December 5-7, due to the request from Japan's government agencies to delay the event from its original July schedule in order to conserve energy and resources after the devastating Tohoku-Kanto earthquake and tsunami.  I attended both the SEMICON Japan and PV Japan events along with David Francis, the Cimetrix Product Manager, and Kerry Iwamoto, the Director of Cimetrix K.K.  While Cimetrix did not have a booth, we had a strong presence in booths of our distributors - Rorze and Meiden.  Both booths were on main aisles of the show and saw plenty of traffic.

In the Rorze booth, Cimetrix software was highlighted with marketing content and demonstrated running a 450mm vacuum cluster and EFEM.  This generated lots of attention on the main aisle.  Rorze has  a very unique offer for the equipment maker  because they can supply the equipment hardware platform along with all Cimetrix software, particularly Cimetrix CIMControlFramework. Rorze offers true one stop shopping when developing a new machine.

Meiden is our new distributor in Japan, and they dedicated a large part of their booth to highlight Cimetrix products and the EDA (Interface A) solution they have designed for a major memory manufacturer in Japan.  Meiden engineers are now trained in Cimetrix software products and they are supporting Cimetrix customers in Japan.  Their offering is unique because they supply industrial PCs to a large percentage of Japanese equipment suppliers and have an army of integration engineering resources to help equipment suppliers.

The show was crowded, and apprehension existed as the industry ponders the European debt crisis and smaller growth for both chip sales and equipment sales in 2012.  There was also a lot of excitement and enthusiasm as the industry contemplates 450mm manufacturing and Interface A deployments to GLOBALFOUNDRIES, Toshiba and TSMC.

It will be an interesting year as we see what develops.

At SEMICON Japan 2009, Cimetrix announced a transition in its distribution strategy in Japan. Rorze Corporation has been appointed as the exclusive distributor in Japan for Cimetrix Factory Automation and Tool Control products. Rorze provides innovative robotic and wafer handling solutions to the global semiconductor industry. 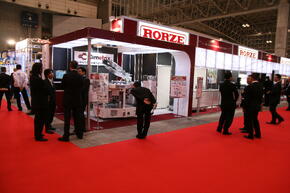 Cimetrix and Rorze have been working together for several years with Rorze transitioning the FA for its Sorter line to Cimetrix CIMConnect and CIM300 products, and working closely with Cimetrix to integrate its EFEM and vacuum platforms with the Cimetrix CIMControlFramework tool control software. This technology exchange led to an investment by Rorze in Cimetrix and the appointment of Rorze as the Cimetrix exclusive distributor in Japan. Rorze’s software department has engineers on staff who are familiar with the SEMI FA standards and have used Cimetrix FA and tool control products on previous projects. Watch for more news as this relationship broadens to add new channels throughout Asia.

At SEMICON Japan, Rorze and Cimetrix demonstrated a new 450mm wafer capable vacuum platform. This platform was controlled by Cimetrix CIMControlFramework and was cycling both 300mm and 450mm wafers. It created quite a stir on the main aisle at SEMICON Japan due to the actual moving demonstration and discussions by ISMI about progress on industry usage of 450mm platforms. Please contact Rorze or Cimetrix for more information.