Brian Rubow is the Director of Client Training and Support for Cimetrix. He is well-known within the industry due to his involvement with the SEMI standards committees. He currently serves as the co-chairs for the North America Information and Control Committee, the North America GEM300 Task Force, and the North America DDA Task Force. Rubow has both a bachelor’s and a master’s in Engineering from Brigham Young University. Alan Weber is currently the Vice President, New Product Innovations for Cimetrix Incorporated. Previously he served on the Board of Directors for eight years before joining the company as a full-time employee in 2011. Alan has been a part of the semiconductor and manufacturing automation industries for over 40 years. He holds bachelor’s and master’s degrees in Electrical Engineering from Rice University.
Find me on:

News You Can Use in SEMI Command and Control Standards, Part 2

In a previous blog we mentioned that two new SEMI standards, E172 and E173, demonstrated that the GEM standard was alive and well and even gaining new momentum by evolving to adopt new technology. The earlier blog focused on E172 with its SEDD files that use an XML schema to describe what is in a GEM interface. Today’s blog is about the E173 Specification for XML SECS-II Message Notation: a new way to log and document GEM/SECS messages, again using an XML schema.

A few years ago Cimetrix was involved in a project prototyping Wait Time Waste concepts and implementation alternatives. This work required Cimetrix engineers to review and extract data from many different SECS-II message log files from a variety of sources, and in the process, exposed a serious weakness in the industry. Because there was no standardized notation for logging SECS-II messages, everyone represented them differently, using different nuances and variations in their notation based loosely on SML (SECS Message Language, which is mentioned in the GEM standard). Additionally, SML itself was designed primarily for human readability, and certainly not for consumption by software programs; moreover, you can’t analyze a long message log without software to do the parsing for you. As a consequence, writing software to review the log files and to extract meaningful data from the log files was far more difficult than it should have been – SML and SML-like notations are simply not suitable for today’s needs. But now there is a suitable, industry-standard alternative.

The original technique we used many years ago was based on the scripting language Tcl (pronounced “tickle”), which uses curly braces as structural delimiters. When programming within the Tcl language, this works very well. In other programming languages, however, it is easy to serialize, but not so easy to deserialize. Another technique Cimetrix had used for a few years was based on XML, which is well supported by all modern programming languages and an integral part of most internet activity. It is very easy to serialize and deserialize. And when formatted with carriage returns and indentation, it is quite easy to read for most humans (at least the ones who are software programmers or web page gurus).

Here is a subjective comparison between the notation alternatives using a scale of 1 to 5 where 5 is excellent and 1 is very poor or difficult.

At Cimetrix we decided to leverage our experience with XML, SECS/GEM standards and the SEMI Standards organization and related communities to develop a notation that everyone in the industry could benefit from. The result was this new standard: SMN. It is comprised of two parts: an XML schema defined specifically for GEM/SECS messaging; and a specification document describing how to use it (although many details of the specification are embedded as annotations within the XML schema file itself). It looks like this:

The schema is found on the SEMI website: http://dom.semi.org/web/wstandards.nsf/complementaryfiles

SMN brings the representation of SECS messages into the Internet era by defining an open, standard, XML-based notation for these messages. So what can you do with this? Here are some ideas:

It is exciting to see the GEM standard evolve and embrace new technologies like XML to make integrating manufacturing equipment into the factories easier and easier.

For more information about these latest standards, and how you can incorporate them into your interface implementation, please contact us.♦

News You Can Use in SEMI Command and Control Standards

As the SEMI GEM standard celebrates its 25th birthday, you may have thought its evolution had just about run its course — but you’d be wrong. Last year, the Information and Control Committee of SEMI Standards passed two new standards that enhance the usability of the entire SECS/GEM suite of standards for equipment suppliers and semiconductor manufacturers alike: E172 SEDD and E173 SMN.

Let us talk about the first of these, the E172 Specification for the SECS Equipment Data Dictionary (SEDD) and postpone E173 Specification for XML SECS-II Message Notation (SMN) discussion for another blog. SEDD standardizes the approach for documenting an equipment’s GEM interface in a way that is both human- and computer-readable. All factories in every industry that use GEM require their equipment suppliers to provide GEM interface documentation in some electronic form for each type of equipment. This is because the GEM interface on every equipment type is unique, supporting unique features and publishing a unique set of data. Of course, the GEM standard itself requires documentation and what has to be in the documentation but does not specify how this is to be accomplished. Until now there has been no common approach or format. This has always left the equipment suppliers to come up with their own format. At best this might be in a multiple-tabbed Excel spreadsheet or a PDF file; and at worst a text document that might or might not have been accurate or even complete. And every equipment supplier completes the documentation in a different structure and style so that no two GEM documents look the same. In summary, everyone is trying to complete this GEM and factory requirement by providing documentation, but in the end what factories are receiving has to be consumed and digested differently based on the equipment supplier, and sometimes even based on the specific equipment type from the same equipment supplier. It is a lot of work for the factory just to understand exactly what is in each GEM interface.

SEDD was created to solve this problem by defining a standard XML schema for documenting a GEM interface. Equipment suppliers create an XML file that complies with the SEDD XML schema to document the GEM interface and then deliver this XML file (called an SEDD file) to the factory.

Why XML? Because XML is the perfect technology for organizing data into a uniform structure that is well supported by modern programming languages. This means that equipment suppliers can use a software program to generate the SEDD file. It also means that factories can write software to read and view the SEDD file. Moreover, they can create intelligent host applications that automatically configure themselves and adapt to a specific GEM interface. 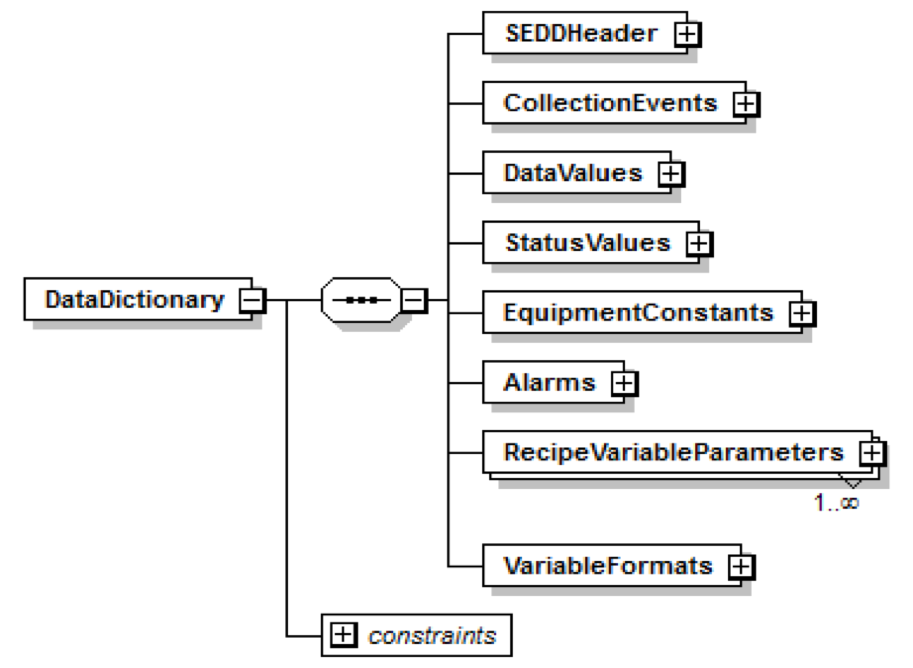 So essentially the SEDD file includes a list of the data available for collection by a host, some general information about the equipment (in the header), and the format of the data variables, status variables and equipment constants. As an example of what details are included, here are the details for collection events.

This is all work that was postponed from the original SEDD standard development. Hopefully ballot 5872 will pass and make SEDD files even more useful. With this additional information an SEDD file would empower GEM host software to configure itself to fully communicate with a GEM interface and make all of the features in the GEM interface available.

This is one example of how GEM technology just keeps getting better. It is not surprising that GEM is getting used in more and more industries.

For more information about this latest standard, and how you can incorporate it into your interface implementation, please contact us.♦